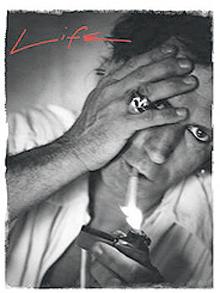 Keith Richards’ 2010 autobiography Life is a solid exposé and memoir on the life lived by the Rolling Stones guitarist. Weighing in at 547 pages of narrative, it’s clear that the Rock and Roll Hall of Famer intends for the reader to come away with a full picture of himself, not just as a founding member of one of the greatest rock bands in history, but as an individual apart from that legend.

The autobiography kicks off with a scandalous story from the road of when Keith and Stones’ rhythm guitarist Ronnie Wood were arrested with a number of illegal substances in Fordyce, Arkansas in 1975. It’s one of the more exciting stories in the book and it sets the tone for numerous tales of drugs and legal issues to follow it.

After that, Life immediately shifts to Keith’s childhood, adolescence until he meets and begins playing music with Mick Jagger (p. 77). This was the hardest part of the book for me to get through. It seemed overburdened with trivial details about Keith Richards the child. While some meaningful events and information is relayed her such as his initial introduction to music and guitar a lot of it seemed unnecessary, but then it is the story of his life, not just of his adult music career.

This makes for an autobiography that is well balanced between the author’s personal life and ideas and his superstar music career. It’s not written in a manner that tries to glorify the rock and roll lifestyle or to revel in fame, but it doesn’t shy away from it or wrap itself in false humility. Keith opens up and tells us quite a lot of personal information about himself, his origins, his philosophies, his loves, his strengths, and his weaknesses. He writes intently on the subject of music and how he came to it with passion, the origins or the Rolling Stones, his often adversarial friendship with lead singer Mick Jagger, his addiction, resulting arrests and subsequent rehabilitation.

The book is chocked full of stories and candid details. Some of the points I liked the most include the following.

The Rolling Stones didn’t write their first song until 1963 when their manager Andrew Loog Oldham locked Keith and Mick in a kitchen together in Willesden and told them to “come up with a song.” Before that, Keith thought songwriting was someone else’s job. This is easy enough to understand since up until this time in music history it was very common for the songwriters to be different people from the performers. Truthfully before the Beatles made it fashionable popular bands rarely composed any of their own music.

Keith makes it quite clear that there was never any rivalry between the Rolling Stones and the Beatles, or between any of their respective members. They were friends. Keith refers to the two bands as being a “mutual-admiration society.” He even says that they would call each other up and plan their single releases so to not compete with each other (pg 141). Any amount of rivalry that may have seemed to exist was nothing more than media hype.

As mentioned above, Keith speaks very candidly about his drug addiction. Early on in his life, Keith experimented with recreational drugs, alcohol and cannabis. He was introduced to amphetamines while on tour in the US with R&B acts including Little Richard and Bo Diddly. He talks a bit about LSD in the 60s and a particular three-day trip he took with John Lennon which was so significant that neither of them could quite remember what all had happened. His terrible addiction to heroin however came about in a far less cavalier manner. It happened the same way it seems to happen with the opiate epidemic plaguing the US today; from an injury and overmedication. He was in a car wreck and afterward was in such pain, having a nurse come to clean his wounds everyday that he was prescribed morphine. After several weeks on the drug he became hooked. When the doctor took him off the medication he had severe withdrawals which he treated with underground opiates and eventually heroin which he continues using for the next several years.

I really love that Keith talks about his experiences with Reggae and Rastafarians in Jamaica where he lived for some time. He speaks very highly of the culture, philosophy and most especially the music of the Rastas he became friends with, and how that was a major influence on him and helped him get his head straight from years of excess.

If gleaned properly there is probably a solid handbook’s worth of advice and information on beginning in music, theories on how to approach playing guitar, songwriting, performing live, recording and band dynamics. Keith doesn’t come across with any rock star pretentiousness to speak of. He does get a little preachy and high minded at points, but otherwise stays well-grounded even when telling tales of times when Keith was anything but grounded.

Life is a thorough trek through the years of Keith Richard’s history. It’s sometimes a little wordy, a bit snide, and long. It isn’t always a page turner, but it does hold a reader’s attention fairly well and it delivers all the juicy, candid details a fan of the Rolling Stones, or just rock and roll history will enjoy.