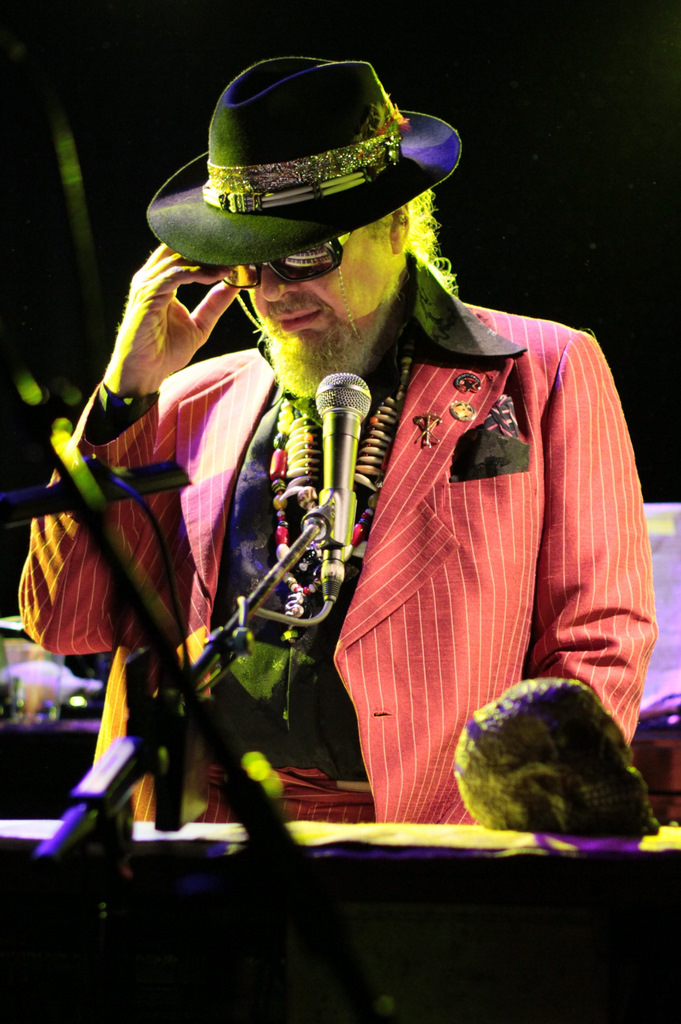 The funky bluesman Mac Rebennack, otherwise known by his stage name Dr. John is a much-honored part of the cultural fabric that is 20th and 21st century New Orleans.  His autobiography Under a Hoodoo Moon chronicles Rebennack’s life from his time as a child coming of age in The Big Easy, through a young struggling musician’s career, and eventually building a legacy as one of America’s most treasured musical icons.

Under a Hoodoo Moon is written in a loose manner with a bit of Rebennack’s New Orleans vernacular, giving it a sense of authenticity and the playfulness that is characteristic of funk music in general and New Orleans music specifically.  The book for the most part follows a linear path, but it repeatedly backtracks to cover stories that Rebennack decided were more relevant at a later point in time. In some cases this seems like a less efficient method, but it does not detract from the overall presentation.

At times Rebennack’s story seems to focus more on the development of his career, business associations, projects and the politics surrounding the music industry, without any emphasis on the personal, philosophical, emotional and inspirational experiences that contributed to the making of the man.  Then he very candidly writes about his struggle with heroin addiction that plagued him for thirty years until he finally kicked it in 1989, but not before doing a stint in Louisiana “Angola” State Penitentiary.  In his writings, it seems Dr. John tended to compartmentalize his professional activities from his more illicit affairs. He introduces the reader to an assortment of characters, hustlers, and junkies along with the musicians he calls family.

In his early days, Rebennack paid the bills by gigging with racially integrated bands at a point in American history when such groups were technically outlawed, and by working as a session musician for countless popular acts. He paints a picture of a golden era of New Orleans music in the 1950s and early 60s before the musicians unions caused so many problems which drove national recording acts to take their business to other cities such as Memphis and Los Angeles.

In 1965, after Rebennack was released from prison, with the music scene dead in New Orleans he too set out for the west coast.  In California he made contact with several colleagues from back home and began working as a session musician with many of the top acts of the day.  These included The Rolling Stones, the Grateful Dead, Sonny and Cher, the O’Jays, Frank Zappa, and Iron Butterfly just to name a few. Dr. John offers some interesting and often humorous observations about some of these acts and his experiences working with them.

During his tenure in Hollywood Rebennack created and adopted the persona of Dr. John, a New Orleans hoodoo medicine man from the 1860s and recorded his ground-breaking Gris Gris album. This is a point in the story where more strictness toward a linear narrative would have improved upon this biography.

Though Dr. John rose to fame on the popularity of Gris Gris with all its voodoo and hoodoo imagery, there is very little in the first two-thirds of the book about his experiences with those traditions.  Up until this point what is mentioned amounts to a brief reference to making goofer dust, a companion burning a black candle to curse the police during a drug score, and more humorously a brief description of a joint ritual in California with another musician who practiced Aleister Crowley styled ceremonial magic in order to curse a producer who had screwed them both in a deal.  It’s not until chapter nine, well after he covers the recording of Gris Gris that Dr. John goes into any detail about his personal connection to a Voodoo temple, and his investment in a voodoo curio shop in New Orleans which really inspired the album.

Under a Hoodoo Moon is a great read, and also provides a fair bit of ethnographic gems covering the roots of the New Orleans musical tradition. He describes his first experiences with the Black Indian Tribes, Mardi Gras Krewes that competed for marching routes during the annual Mardi Gras festivities and pioneered second-line drumming that gives New Orleans music much of its uniqueness.  He also dedicates a significant chunk near the end of the book to speaking nostalgically and reverentially about his time playing with Professor Longhair, the New Orleans pianist who had more influence upon him than anyone else.

I enjoyed reading every page.